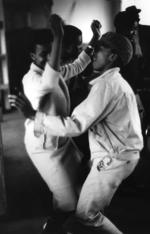 Mbaqanga was a South African style of music that was popular throughout the 1960’s to the 1980’s, derived from the earlier sounds of marabi. It continues to be a popular genre in South Africa.

Mbaqanga music developed during the apartheid years in South Africa, when the Group Areas Act of 1950 prohibited different tribes of people of colour (such as Zulu and Xhosa people) to interact with one another. Consequently, ‘black’ music was kept within tribal boundaries.

As black music culture grew in the urbanised townships, musicians were eager to venture into new, original styles of music. Mbaqanga evolved in the 1960’s from traditional Zulu music. Western instruments were used to form a local version of jazz - American jazz influence was mixed with traditional Zulu instruments to form varietal harmonic patterns of blues and swanky African sounds.

Mbaqanga is also influenced by kwela music and can be seen as a replica of the earlier marabi style of music (the first attempt at African jazz). The appeal of mbaqanga lay with the incorporation of traditional dance styles of the Zulu people.

This was a selling point for musicians back in the day, who would play mbaqanga at social gatherings, and people would dance continuously and enjoy the cultural celebration.

Townships like early Sophiatown and Soweto produced mbaqanga musicians and bands, such as Simon "Mahlathini" Nkabinde, Miriam Makeba and the Mahotella Queens. The genre is still a familiar and lively sound to many South Africans as it continues to influence the SA music scene.

The late Langa jazz legend Ngxeko Syfred Dlova described mbaqanga as a music genre that could only be performed by South African, urbanised musicians. “Mbaqanga is an expression of African urban musicians; maybe an interpretation of jazz. It would be almost a school of music, in the same mode as jazz.

Today, it is not only performed by urbanised musicians - it can be performed by people in rural areas also. It is strictly South African and I don't think you can get that kind of sound anywhere else in the world. It is a feeling of true expression, of black musicians, in a way like how we can express ourselves through these western instruments. But it also has a jazz influence in its origins.”

He continued to note that the music genre is very African. “Mbaqanga does not need any level of sophistication in terms of academia - it is a natural expression of people of the music they enjoy. It is not only appreciated by the musicians who play the music but also by the listeners. I mean, it frees them.

If you could see people dance when you play mbaqanga, they express their joy, their feelings and their appreciation of the music. And the musicians also respond. It's like everybody kind of participates. The performer and the listener, it's just one feeling or spirit which rotates among these people. It is music that will always be with the people. It will never leave the people and the people will never leave that music. It is part of the people.”