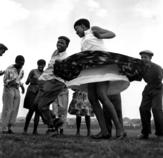 ©Dr Peter Magubane
Sophiatown was home to the vibrant sounds of marabi.
Marabi was a South African style of music rooted in jazz mixed with sounds of African rhythm. This music genre was developed during the late 1920’s in South Africa, when people of colour were becoming more urbanised and moved to townships. Music was made as a distraction from their dire circumstances of poverty and hardship.
The name marabi derived from a keyboard style that resonated with the sounds of American jazz. Thus the music genre was a combination of blues and traditional African sounds, that gave marabi the distinctively unique rhythm of American and new-developed African jazz flavour. The intention of playing marabi music was to attract people to the local ‘shebeen’ - place of social drinking - in the township, to get them dancing and socialising.
The unique sound of marabi is a mixture of varying note lengths, repetitive harmonic patterns typical of African music and a few simple chords repeated, set to the tone of jazz. This ensured songs would continue for a long time and people would continue to dance and enjoy the rhythm without having to know the song well.
Marabi was a subculture that was exclusive to townships. It received no other exposure outside of townships. Marabi musicians were part of an underground musical culture, and was thus never recorded due to the illicit connections it had. Its popularity grew, however, after the 1930’s. The growth of broadcast radio focused on people of colour ensured that the marabi and other township music genres gained recognition. Cape Jazz musicians such as Basil Coetzee or Abdullah Ibrahim drew inspiration from marabi for their own music in later years. Marabi was the basis on which other African jazz genres developed, such as mbaqanga.

Mbaqanga is a township jazz style that derives from marabi. Although many musicians distinguish between the two genres, late jazz musician Ngxeko Syfred Dlova saw no difference between marabi and mbaqanga. "Marabi is Mbaqanga. In the old days, there were some limitations in acquiring western instruments. Marabi is mbaqanga that people used to play on weekends. They would get sounds out of metal spoons and they would have a piano there. That music, unfortunately, was never recorded; and it is unfortunate that South Africa lost a world of musical history that would have been there today for people to listen to, showing the history, where black music comes from, which has some alignments to jazz. For myself, it is difficult to distinguish between marabi and mbaqanga. It's a matter of choice or of selecting the words. One would be happy to say mbaqanga, one would say marabi. In my own mind, there is absolutely no difference between marabi and mbaqanga."