To this day praise singers play an integral role in proclaiming the power and achievements of important leaders. In post-apartheid South Africa, they celebrated the lives of key political figures like Nelson Mandela.

Praise singers also supported the efforts of political activists and trade unions seeing to overthrow the apartheid state in the course of the 1970s and 1980s.

The earliest written record of a praise singer is from the Methodist missionary James Whitworth who in 1825 visited the Gcaleka chief, Hintsa, noting that: 'At sunset, a man proclaimed aloud the transactions of the day, which seems to be the usual custom, ending with “Our Captain is a great Captain.

When the white men came to see him, he received them kindly and gave them an ox to eat.” An imbongi attached to the royal homestead of the second Zulu king, Dingane, appears to have worn both a leopard skin garment and a leopard-skin mask. In the 19th century, it was the prerogative of powerful indigenous leaders like Dingane to distribute leopard skins to highly-regarded praise singers and favoured chiefs. 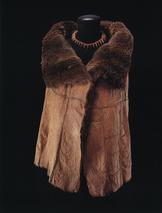 Kaross Eastern Cape 19th century Material: Rock Hyrax skin, glass beads, and leather Height: 78 cm; Width: 120 cm Before the introduction of imported blankets, the skins of both wild and domestic animals were used as protection against the winter cold. Some, like this one, which was made from 22 pelts of the Rock Hyrax or Dassies, were worn as cloaks.

Early European settlers also prized garments like these. The Reverend Woods, who owned a few, described them as wonderfully light but very warm, noting that they were always worn with the furry side inwards. In his account of the production of these cloaks, Woods noted that the maker would join pieces of the fur, “placing them together with the hairy side inwards, and the edges exactly matching each other.

He then repeatedly passes his long needle between the two pieces so to press the hair downwards, and prevent it being caught in the thread. He then bores a few holes in a line with each other, and passes the sinew-fibre through them, casting a single hitch over each hole, but leaving the thread loose.

When he has made two or three such holes, and passed the thread through them, he draws them tight in regular succession, so that he produces a sort of lock-stitch, and his work will not become loose, even though it may be cut repeatedly. Finally, he rubs down the seam, and, when properly done, the two edges lie as flat as if they were one single piece of skin." 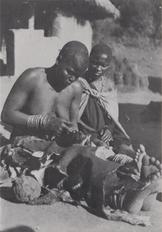 Throughout South Africa people commonly wore skins, turning them into garments and various accessories used on festive and ritual occasions. Skin-working involved a number of processes: flaying the animal, fleshing, dressing, cutting and sewing. In the past, men did most of this work, but women assisted with the dressing of skins.

To prepare them, skins were secured to the ground with wooden pegs, then rubbed with an abrasive stone or dry maize cobs to scrape away the fat and clean the flesh side. Once dry, the arduous process of softening skins required rubbing them briskly by hand, rewetting small sections at a time to do so. Plant oils and other repellents were used to protect these skins from infestation by insects and bacteria.

©Sandra Klopper
Leather and fur items for sale at the headquarters of the Shembe Church in Inanda, July 2011.

The practice of curing and preparing the hides of domestic and wild animals for garments and accessories worn on special occasions is still widespread among members of the Ibandla lamaNazaretha, or independent Shembe Church. Thousands of church members meet annually at the headquarters of the church in Inanda, near Durban.

On these occasions, skilled bead makers, seamstresses and tailors sell wares to fellow church members, including loin and other coverings made from hides and the furs of wild animals. In recent years, conservationists have launched efforts to prevent the use of leopard skin, trying instead to convince Shembe devotees to opt for synthetic or ‘fake’ furs, with limited success.