Culture: Zulu Period: 19th century Material: wood Left: H 13 cm, L 43 cm Right: H 14.5 cm, L 37 cm The amasumpa (raised 'warts' or bumps) pattern on these two examples originated in the Zulu Kingdom in the nineteenth century where the motif was considered to represent wealth in the form of cattle.

It was relatively uncommon for the central leg of headrests of this kind to differ from those at either end. Variations like these attest to the inventive powers of skilled carvers, some of whom introduced interesting departures from the standard amasumpa design.

The amasumpa motif, which may allude to the idea of wealth in the form of cattle, remained popular in the northern area of present-day KwaZulu-Natal throughout the 20th century. Carvers from the region formerly occupied by the Zulu kingdom produced a wide range of two and three-legged headrests covered in this pattern. For reasons that remain unclear, some of these headrests are unusually small. 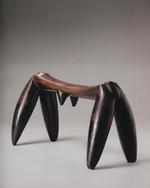 These details served to affirm the role many Southern African communities ascribed to cattle in mediating relations between the living and the dead. Since the ancestors were also responsible for regulating the fertility, not only of cattle but also of their own human descendants, the addition to this neckrest of breast-like projections heightens the powerful allusion to sexual potency or fecundity evidenced in the expressive treatment of the forms.

©Heini Schneebeli
Culture: probably Zulu Period: 19th century Material: wood Height: 18 cm, Length: 34 cm The abstracted bovine form of this chunky neckrest is bold in its formal construction. The grooved markings, which are exceptionally deep, act as a foil for the unusually long abdominal appendage, which alludes to the notion of ‘bullness’ (ubunkunzi), thereby signifying the idea of virility and fertility. Bulls feature repeatedly in Zulu praise poetry and related music genres.

©Heini Schneebeli
Culture: Zulu Period: 19th century Material: wood Height: 11.5 cm, Length: 70.5 cm This unusually long neckrest has a total of five sets of legs. Neck or headrests of this kind were probably intended to allude to both the legs and horns of cattle, which to this day are believed to mediate between the living and the dead. These allusions to cattle serve to affirm the fundamental importance Zulu-speakers ascribed to their ancestors in securing the health and fertility of the living. 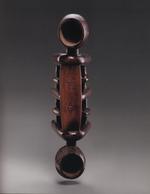 Culture: possibly Swazi Period: 19th century Material: wood Height: 14 cm, Length: 42.5 cm Headrests of this kind have been attributed to the Swazi on the basis of the vertical fluting used on the legs, but fluting of this kind was fairly common among other groups in the region.

The Swazi, who formed a coherent identity only relatively late in the 19th century, commonly incorporated symbolic allusions to cattle in their headrests, including tails at either end, and a central lug on the underside of its platform.

Culture: Tsonga Period: 19th century Material: wood Height: 16 5 cm, Length: 20 cm The economic and symbolic importance of cattle explains the use of a variety of cattle motifs and metaphorical allusions on headrests from the Southern African region. But cattle are only occasionally fully represented in figurative form, as is the case in this headrest.

This quadruped is unambiguously identifiable as bovine by its pronounced horns, although the breadth of the head and the stocky proportions could be seen as referring, if not to a buffalo, then specifically to a bull.

Because the control of cattle rested firmly within the male domain, it seems reasonable to postulate that headrests with this kind of iconography would have been used by men, and possibly by men of high status.

Culture: Tsonga Period: 19th century Material: wood Height: 15 cm, Length: 18.5 cm Some headrests combine human and animal features into a single caryatid, like the example in this image, where a human head with a headring completes an animal body.

The gendering of this image is visible not only in the hairstyle of the human head, but also in the detailed male genitalia of the body. Adze marks are clearly visible on the face and other areas of the headrest. This evidence of the carver’s hand animates the form, as does the addition of pokerwork details.

Culture: Ngoni Period: 19th century Height: 9.5 cm, Length: 44 cm The Ngoni people who live in Malawi and Tanzania are the descendants of a group who migrated from the area around present-day Swaziland to their current homes in the early nineteenth century.

Once they had settled, they adopted many cultural traits from their new neighbours, but they also maintained past customs linked to manhood, such as the use of the head-ring, age-grade regiments and an emphasis on cattle in their economy.

This bovine-style headrest can be traced back to its Zulu-Swazi origins, particularly in the use of horn-like legs and head/tail forms at either end of a low-slung yet elegant platform. The reference to cattle is as strong as that in some Swazi and Zulu examples, but these forms are nevertheless immediately recognisable as Ngoni.