Complexity and Diversity in Beadwork Styles

©Muller and Snelleman c.1892
When Muller and Snelleman travelled through southern Africa in the late 19th century, they collected and recorded examples of beadwork styles from different communities, including a South Sotho beaded garment with triangular patterns stacked one on top of the other. This design principle was commonly used in South Sotho beadwork at that time. 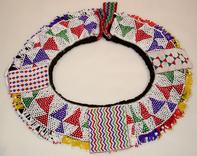 Tsonga beaded waistband
Mid- to Late 20th century
Because of the practice of recycling beads and beadwork panels, it is not uncommon to find garments that combine beaded sections made at different times. Beads imported from Taiwan since the late 20th century are cheaper and larger than older glass beads originating from Europe. In some communities, labour-saving beadwork techniques have become increasingly fashionable, including a reliance on sparsely beaded, latticework designs.

©Sandra Klopper
Stall at the Inanda headquarters of the Shembe Church, July 2011.

©Eric Miller
During the important annual rituals of the Ibandla lamaNazaretha, an independent church founded by Isaiah Shembe in the early 20th century, married women wear beaded headbands signalling respect (hlonipha) for important church elders and male members of their husbands’ families. The style of these headbands has changed significantly over time. Today, the beadwork patterns are increasingly organic in design, while the use of luminous silver and gold beads in combination with pastel blues, yellows and greens have replaced the deep red, blue and black beads formerly favoured for these headbands. This change appears to have been inspired by the work of Shembe bead specialists who were employed to produce beadwork for various European fashion houses under the guidance of designers working for this industry.